In June 2016 at the Embassy of the Czech Republic in Tel Aviv was officially and successfully introduced Ensemble Moscheles named by a famous native of Prague Ignaz Moscheles (1794 Praha – 1870 Lipsko).

Ensemble Moscheles was already founded in 2014 to propagate compositions of Jewish composers in Diaspora and Israel. The research of the archives in Prague and elsewhere in Europe has discovered a great amount of the compositions of forgotten authors (Karl Goldmark, Moritz Moszkowski, Ferdinand David, Heinrich Wilhelm Ernst, Benjamin Godard, Julius Schulhoff), who were celebrities in that time and their compositions used to be commonly played at the world best stage performances. This is the reason why Ensemble Moscheles wants to stimulate an interest about this kind of music.

At the same time it also wants to make the unique compositions of current Israel composers available to the European listener. Ensemble Moscheles has studied and introduced the compositions of the current composers, such as Menachem Zur, Ayal Adler, Yinam Leef, Hilat Ben-Kennaz, Eitan Avitsur, Uri Brener and others.

An ensemble consists of: 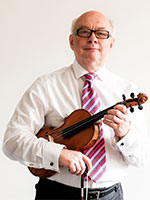 Tomas Tulacek is a violinist of a wide – ranging interest, whose performances of the standard repertoire as well as of the twentieth-century and contemporary works have won him recognition in his native Czech Republic as well as in many other countries, including Great Britain, France, Italy, Switzerland, Belgium, Slovenia, Croatia and Hungary.

Tomas was born into a long line of professional Prague musicians. He made his debut at the age of ten, with concerts and TV appearances in Poland, East Germany and the former Czechoslovakia. He studied with the distinguished teacher Jozef Micka. At the Prague Conservatoire, and later at the Prague Academy of Music, he was a student of Nora Grumlikova. In 1983, he was awarded a postgraduate scholarship that enabled him to study with Yfrah Neeman at the Guildhall School of Music in London. On completing his studies, he made London his home for many years, establishing himself as a performer and teacher there.

He was always been keen to promote lesser known areas of the violin repertoire. In 1993 he made a CD of the twentieth-century and contemporary pieces by Gorecki, Bloch, Matthews, Foerster and Pokorny. Later Tomas recorded a second CD with the Czech pianist Vera Mullerova. He has also led the Lundonia and Lichtenstein ensembles, the Viotti Quartet and the Oxford and Zagreb chamber orchestras. He formed a duo partnership with the English pianist Julian Barber with whom he has performed classical works by Haydn, Vanhal and Hummel.

He is due to give the first Israeli performances of four sonatas by Vanhal discovered at the Museum of Czech Music in Prague. There started his cooperation with the Israeli pianist Amit Dolberg, and the Israeli composers Ayal Adler, Yinam Leef, etc. Tomas naturally inclines to Israeli music and this is the reason why he with Ensemble Moscheles represents to public, besides the Czech less known composers of the 18th century, also present Israeli authors.

Ada Slivanská is a graduate of Prague´s Conservatoire where she studied violin and composition, and of the Charles University School of Liberal Art where she read musicology. Even during her studies she established a chamber ensemble named Quartetto con flauto with which she has cut four compact disc and has appeared on many domestic and foreign stages (Spain, Germany, Poland, Belgium, Italy, USA, and Japan). Following her graduation and a one year stint with the Central Bohemia Symphonic Orchestra at Poděbrady she joined the Czech Radio Symphonic Orchestra with which she remained until 1999 and several years she was member of Praque´s State Opera Orchestra.

Since 1989 she has also been pursuing managerial and production activities. This is why at present – apart from performing as solo and chamber orchestra player, she was associate pedagogue and adviser conductor of the International Madrid´s Boccherini Festival 2005, Moz-artissimo 2006 and 2007 “ ChamberArt” and is also manager of several soloist and chamber ensembles.

Ada Slivanská is executive director of the Ameropa International Music Festival and Chamber Courses and the co-organizer of the The Prague Horn International Music Festival, Podblanický hudební podzim in which she also participates as performer. 2007-2012 she was artistic director of “Terezin International Music Centre” (TIMUC) in Czech Republic. Thanks to her wide range organizational experience she distinctly contributed to the forming of the Camerata filharmonica Bohemia chamber orchestra and presently she works as orchestra manager since its founding in 2002. 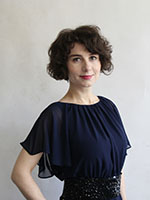 Angelika was born in Banovce, Slovakia, into a music loving family. She started her singing lessons at Desider Kardos Conservatory of Music in Topolcany and continued later at the Catholic University in Ruzomberok, where she studied teaching methods in singing. During her time at University she received a Principal´s award for successfully representing College abroad and had collaborated with the University choir Benedictus as soloist, taking part in their foreign tours to Poland, Czech Republic, France and Hungary.

In 2015 Angelika had completed her post - graduate studies at the Krakow Academy of Music as a student of Ewa Wolak and appeared to great critical acclaim in Handel´s Rodelinda and Mozart´s Marriage of Figaro as Cherubino.

Upon her return to Slovakia, Angelika has been taking private singing lessons with well known teacher Vlasta Hudecova and pursued her solo career, appearing in Banska Bystrica Opera as Third lady in The magic Flute by W. A. Mozart and becoming a member of Ensemble Moscheles, specializing in performing music by Jewish romantic composers as well as Israeli contemporary music.

Alena was born in Bratislava in 1988. At the age of six, she started to attend E. Suchoň Elementary School of Music (class of Alena Klattová). In that time, the famous pianist Eva Fischerová-Martvoňová, who raised several generations of successful pianists, took her under her wing. Thanks to her, Alena’s talent has been greatly developed, which was proved by many national and international prizes, as well as her debut with Brno Philharmonic at the age of thirteen. As a soloist, she later performed with the Slovak Philharmonic Orchestra and the Orchestra of National Theatre Brno.

Her piano studies continued at Conservatory of Bratislava under the guidance of Peter Pažický. Their cooperation, which lasts to this day, brought other successes in different competitions and imprints in her soft and colorful tone. Next steps led to Janáček Academy of Music and Performing Arts in Brno where she took piano lessons from Jan Jiraský and piano pedagogy lessons from Alena Vlasáková. During her studies and after them she attended over a dozen of masterclasses of amazing pianists, eg: Matti Raekallio, Alexander Strukov, Eduardus Halim, etc.

Alena graduated her studies in 2014, however she’s been accompanying and teaching since 2005. For two seasons she has worked as a ballet accompanist at the Slovak National Theatre, where until this day she remains as a member of the orchestra. At the same time she works at Jozef Kresánek Elementary School of Music as a piano teacher and accompanist of string and wind instruments and a choir. Nowadays she also works as an external accompanist at the Department of Singing at the Music and Dance Faculty of the Academy of Performing Arts, Bratislava. She is a resident accompanist of the International Masterclass Camerata Comorra.

Not only she works with youth of different age categories, but is also demanded by professional established musicians. As a cooperative pianist she performed in trios and duos with violin, viola, cello, double-bass, clarinet, flute, oboe and vibraphone. Together with a pianist Vladimír Šranko they formed a piano duo. Picked by a contemporary Slovak composers Evgeni Iršai, Marek Piaček, Viliam Gräffinger, Róbert Kraus to premiere their new pieces. She performed at the festivals Nitra Musical Autumn, Bojnice Culture Summer, Sunday Matinees in the City Gallery of Bratislava, etc. Alena’s musical range is even wider, that is clear from her performance with French chanson repertoire at the various theatre festivals. 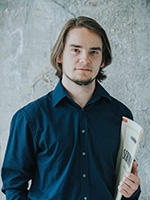 Henrik Szőcs belongs to the youngest generation of Hungarian pianists with extensive experience in chamber music.

He first studied piano playing at the Hermann László Conservatory of Music in Székesfehérvár, continuing later at the Liszt Academy of Music where his teachers were Jenő Jandó and Balázs Kecskés.

After graduating from the Liszt Academy Henrik was offered the opportunity to study further in Basel, Switzerland. His teachers there were Claudio Martínez Mehner and Jan Schultsz.

Henrik was also very successful in competitions receiving 1st prize and special prize respectively at Béla Bartók competitions in Vienna and Szeged. In addition to to his concert career he also works as sought after piano teacher at Hermann László Conservatory of Music in Székesfehérvár. 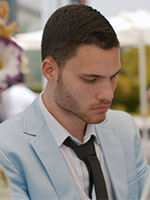 Shaked is an Israeli pianist and composer whose works are based on diverse styles and influences – classical, jazz, arabic, latin, and various film soundtracks. Despite his young age, his passion and talent drove him to perform many concerts in Israel, both as an accompanist and as a soloist. Shaked was introduced to Ensemble Moscheles during their visit to Israel, where they performed together to celebrate the 100th anniversary of Czechoslovakia.

Shaked was born in Haifa, Israel. At the age of 9, he began his piano studies as a student of Anna Raitburg at the Rubin Conservatory in Haifa. Throughout his years in the conservatory, Shaked participated in several national piano competitions and even studied a second instrument – the clarinet. As a pianist, Shaked performed with the conservatory’s orchestra in Keshet Eilon Music Center, and was awarded the third prize in the Young Pianist Competition in 2014.

In 2015, Shaked began his military service in the intelligence corps of the IDF. During his service, Shaked contributed to the security of the state of Israel and its people, including many classified operations. Due to this, Shaked had to balance his duty of protecting the country and his passion for music. He managed to maintain his talent and even compose music during his military service. His piano piece “Midnight Journey” that he wrote during his last year in the army, represents some of the feelings and events that he went through during his years in the army. As part of his agenda to bring music everywhere he goes, Shaked has also played in official military ceremonies and contributed to the community by performing for battered women, holocaust survivors, and youth with special needs.

In March 2018, Shaked finished his military service. As a new period begins in his life, he is enthusiastic and passionate to perform and compose music to share with the audience the joy he finds in music.

1. Opening of the permanent exhibition of Emanuel and Josef Zima at the Embassy of the Czech Republic in Budapest 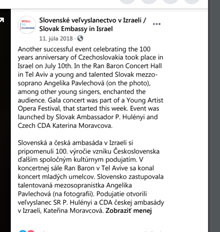 2. Another successful event celebrating the 100 years anniversary of Czechoslovakia took place in Israel